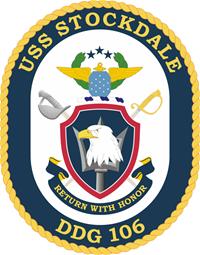 The USS Stockdale DDG 106 was officially adopted by the City of Laguna Niguel on April 1st, 2014 as part of the America Supporting Americans (ASA) Adopt a Ship Program.

The America Supporting Americans program was created to provide a mechanism whereby all branches of the United States Armed Services would be "adopted" by an American City. The purpose of the program is to bond Americans with servicemen and women who so bravely serve our country.

The USS Stockdale DDG 106 was commissioned on April 18, 2009 and named after Vice Admiral James B. Stockdale, USN. The ship is currently under the command of Commander Sean Grunwell and is homeported in San Diego with a crew of approximately 307 sailors.

The eagle, symbol of vigilance and courage, represents the Vice Admiral Stockdale's exemplary resistance to this captors' brutality and pressure to use him and his fellow captives as propaganda tools. The eagle refers also to Stockdale's award of aviator wings represented in the crest and his distinction as pilot and instructor. Dark blue represents the U.S. Navy, the white of the eagle's head denotes integrity and idealism. the demi-trident refers to leadership and the Vice Admiral's commitment to uphold in captivity the Navy standards of conduct. The silver and scarlet bordure represents the cohesion of navy personnel under stress and their tradition of sacrifice and courage.

Vice Admiral Stockdale's distinction as the only three or four star officer in Navy history to wear both aviator wings and the Congressional Medal of Honor is signified by the wings, the three stars above and the Celeste blue octagon which recalls both the Medal of Honor and the Aegis-class capabilities of the DDG 106. The many combat decorations awarded the Vice Admiral during his distinguished career are also recalled by the three stars at top. The laurel wreath traditionally conveys honor and achievement.

The coat of arms as described above on a white field enclosed within a dark blue collar radiused top and bottom and edged on the outside with gold rope and inscribed at top "USS Stockdale" and in base "DDG 106" in gold letters.

USS Stockdale on Facebook
COVID-19 Resources
Hot Topics
Economic Development
E-Newsletter
Strategic Plan
Building & Safety
Access Online Services
Our Mission
The City of Laguna Niguel is committed to providing a vibrant quality of life for all residents, businesses and visitors in a safe, beautiful and involved community.
Our Vision
The City of Laguna Niguel is dedicated to preserving a safe, flourishing and community-oriented environment through thoughtful engagement, financial responsibility and a commitment to innovation.
Our Values
Integrity, Excellence, Innovation, Security, Quality, Service